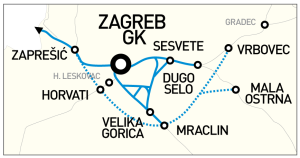 The goals of all projects to be developed in the future are the improvement of local and regional rail passenger transport, better integration of the rail system into the public transport system of the City of Zagreb, improved availability of railway and local public transport and increased share of railway and local public transport in total transport in the wider area of ​​the City Zagreb. Barriers between parts of the City located on both sides of the railway line with be resolved. Connecting the “Franjo Tuđman” Airport with the City of Zagreb by rail will be considered. The projects will also improve overall rail traffic through the Zagreb node as the most important node on the Croatian railway network.

The intention is to improve transit freight and for Zagreb to become a regional hub for this type of transport. Projects should also ensure improved environmental impacts, including mitigation of climate change impacts in terms of reducing greenhouse gas emissions, improving traffic safety and the level of protection of the railway system. Given the complexity of the Zagreb railway node, this project will first consider individual functional spatial units, traffic needs and possibilities for their development, and then fit adopted solutions by phases into models of solving the limitations of the Zagreb node. Functional spatial units are certain parts of the railway node involving individual railway traffic routes passing through the node area, parts of the railway infrastructure in the narrower or wider urban area, or new railway line paths. Based on the concept defined in this way, appropriate conceptual designs will be developed to define the path of the individual railway lines, required traffic management systems, electric traction system, terminals and maintenance and storage of traffic units.

Within the project, the conceptual designs and a feasibility study are planned in two parts; Study of traffic requirements analysis and a proposal of activities and implementation measured per phases, and a feasibility study of the suggested variant solutions with selected optimal variants for individual railway lines, i.e. functional node units. A cost and benefit analysis, Strategic environmental impact study, Basis for the change of spatial and planning documentation, project management plan, and a promotion and visibility plan will be developed.

Based on the analysis conducted in the above-mentioned studies, it will be necessary to select the most favourable of the proposed models or to make an optimal combination of technical solutions from the proposed models as the final proposal of the study model for development by stages and modernization of the Zagreb railway node over a longer time period, with a clearly defined strategy and goals.

The Grant Agreement for the preparation of study documentation with total value of HRK 28,099,098.07 and eligible costs in the amount of HRK 22,738,398.07, of which the EU co-finances HRK 19,327,638.35, was signed on December 17, 2018, by the Ministry of the Sea, Transport and Infrastructure, the Central Finance and Contracting Agency for EU Programs and Projects (SAFU) and HŽ Infrastruktura. The expected total duration of the project is 34 months from the signing of the contract. The project is co-financed by the European Union from the Operational Program Competitiveness and Cohesion from the Cohesion Fund (www.strukturnifondovi.hr) with 85 per cent of eligible costs and by HŽ Infrastruktura with 15 per cent.