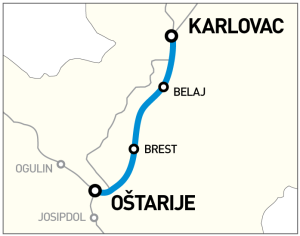 The Karlovac – Oštarije section is an integral part of the M202 Zagreb GK – Karlovac – Rijeka main corridor railway line for international traffic, which is located on the RH2 rail transport corridor and the Mediterranean Trans-European railway corridor. On the relevant corridor, some projects have been completed (modernization of signalling and interlocking devices at Zagreb Main Station), some sections are in the works’ performance phase (Dugo Selo – Križevci), while some projects are in the phase of public procurement for the performance of works and supervision (Križevci – Koprivnica – state border). Karlovac – Oštarije section is a continuation of the Hrvatski Leskovac – Karlovac section, for which design documents are just being prepared, as well as the Major project application for co-financing of works by EU funds. Besides the mentioned sections, Oštarije – Škrljevo section continues further to the Karlovac – Oštarije section, for which public procurement for the preparation of study documents is currently ongoing, and Škrljevo – Rijeka – Jurdani section, for which design documentation is being prepared.

On December 6, 2018, in Karlovac, the Minister of the Sea, Transport and Infrastructure, Mr. Oleg Butković and Mr. Tomislav Petric, Director of the Central Finance and Contracting Agency, signed the Grant agreement for the project of the Preparation of study and design documents for the modernization of M202 Zagreb GK – Rijeka railway line, Karlovac – Oštarije section, with the funds beneficiary, HŽ Infrastruktura d.o.o., represented by the President of the Management Board, Mr Ivan Kršić. This means that a promise given on several occasions by the Government of the Republic of Croatia was fulfilled: making the railway a priority.

Project aim is to prepare study and design documents for the modernization and construction of the Zagreb – Rijeka route to connect the wider area of Karlovac and Oštarije, together with meeting technical and technological conditions which main corridor lines for international traffic have to fulfil.

Preparing the foreseen technical documentation is a prerequisite for contract performance on the relevant section, which will secure higher train operation speeds, shorten travel times, increase track section capacity, increase safe flow of railway traffic and enable the condition of interoperability to be met on the entire Mediterranean Trans-European railway corridor.

Within the scope of this project, study documents will be prepared (Feasibility study, Cost and benefit analysis (CBA), Environmental impact assessment and Major project application for EU funds co-financing) and design documents (Preliminary design with obtaining a location permit, Main design with obtaining building permits, Documents needed to resolve property and legal relations and secure proof of legal interest and Design documents for works and supervision). Funds secured under this contract will also be used to finance project management and activities connected with advertising and visibility.

Find out more about the project here: korporativne.komunikacije@hzinfra.hr.