With this huge project, HŽ Infrastruktura continues to modernize the Mediterranean Corridor, which provides a link via the Port of Rijeka, Zagreb and Budapest to the Iberian Peninsula, with the Hungarian and Ukrainian border, and this means also with the unique Trans-European Transport Network (TEN-T). It is a part of the project of setting up a high-efficiency double-track railway line for combined transport from the Hungarian border to the Port of Rijeka.

The project is co-financed by the Connecting Europe Facility (CEF) – the transport sector. The total estimated value of the project is 350 million euros (excluding VAT).

Grant Agreement No. INEA/CEF/TRAN/M2015/1126931, was concluded on October 6, 2016, between the Executive Agency for Innovation and Networks (INEA), on the basis of authority granted by the European Commission and HŽ Infrastruktura.

The project envisages the upgrade the second track and reconstruction of the existing track from Križevci to the Hungarian border. A speed of 160 km/h will be enabled, restricted to 150 km/h in Lepavina and 100 km/h in Koprivnica, since these are urban areas with specific restrictions. The new double-track section will follow the existing route with the exception of the Carevdar-Lepavina sub-section. The total length of the Križevci -Koprivnica – state border with Hungary line section will be reduced from 43.2 km to 42.6 km.

The following is foreseen within the scope of the project:

– reconstruction of 2 stations: Lepavina and Koprivnica

– construction of 7 bridges, 1 gallery and 3 viaducts, of which one is a wildlife crossing

– works on the construction and reconstruction of the overhead contact line and other power facilities, such as electric traction facilities, power supply facilities and outdoor lighting in stops and stations

–works on the installation of new elements and devices on the signalling-interlocking, traffic control and telecommunication system

Tender documentation for the selection of contractors in the public procurement procedure was published on November 21, 2018. On 24 December 2019, HŽ Infrastruktura decided to select a contractor and the Contract in the amount of EUR 322.4 million (VAT excluded) was signed on March 12, 2020, with Cengiz Insaat Sanayi ve Ticaret A.S. The duration of the works’ contract is 42 months.

The tender documentation in the public procurement procedure for the selection of the supervision service provider was published on November 28, 2018.
On January 13, 2020, HŽ Infrastruktura made the selection decision, and on March 23, 2020, the Contract for Supervision Service was signed with the JV Centar za organizaciju građenja d.o.o. and DB Engineering & Consulting GmbH. The value of the Contract is EUR 5,045,220.00 (excluding VAT). The duration of the Supervision Service Contract is 45 months.

The preparation of design documentation for the project in question is also co-financed from European funds, within the IPA programme framework, i.e. the Operational Program Transport.

At the moment, works are carried out on the construction of a railway bridge over Drava River in Botovo. The Drava Bridge, 338 meters long, will be built for a double-track railway line. The lower structure of the bridge, consisting of two abutments and two pillars, will be constructed of reinforced concrete, while the upper structure of the bridge will be similar in shape to the existing one and constructed of steel.

In addition to the Drava bridge, works are being carried out on the route in front of the future Novo Drnje station and behind it, and at Novo Drnje station, on the route between Križevci and Vuk overpass, on Vuk and Križevci overpasses and the Carevdar viaduct. Excavations for the frame reinforced concrete structure Lepavina 2 are also being carried out, the terrain along the entire route is being cleaned and the installations are being moved.

VIDEO Works on the Križevci overpass

VIDEO Works on the Vuk overpass

The Ceremony of Contract Signing 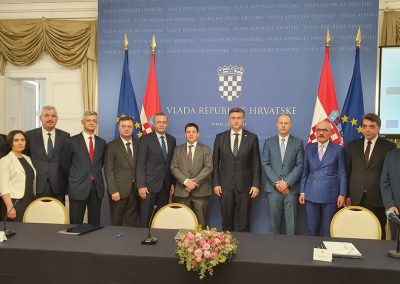 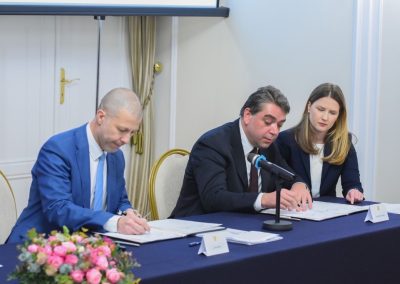