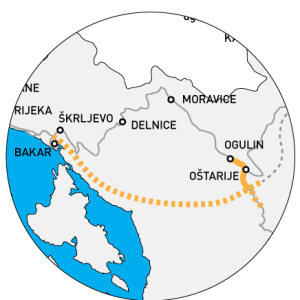 The Oštarije – Škrljevo section is an integral part of the M202 Zagreb GK – Rijeka railway line for international transport on RH2 corridor and also part of the section Rijeka – Zagreb – Budapest on the Mediterranean corridor.

On October 27, 2017, HŽ Infrastruktura d.o.o. signed the Grant Agreement no. INEA/CEF/TRAN/M2016/1366913  under the Connecting Europe Facility (CEF) with the European Climate, Infrastructure and Environment Executive Agency (CINEA). The value of the Agreement is EUR 1.97 million, of which EUR 1.68 million is co-financed from CEF or 85 per cent, and the remaining amount of EUR 0.29 million or 15 per cent is co-financed from the State Budget of the Republic of Croatia.

On May 15, 2020, HŽ Infrastruktura signed a contract for the preparation of study documentation with a consortium consisting of the companies ŽPD d.d., Granova d.o.o., Institut IGH d.d., Rijekaprojekt d.o.o. and IPZ d.d., in the amount of HRK 17.9 million.

The contract includes preparation of the following: